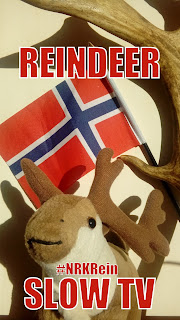 Welcome to The Slow TV Blog's first round-up of news for covering the forthcoming reindeer migration on Norwegian Television. A week long story of the reindeer heading to their summer pastures under the guidance of the Sami reindeer-herders, with many smaller stories.

The cat is well and truly out of the bag, or perhaps better put, the reindeer is out of the corral! These are the news stories over the last few days for this exciting reindeer project. (Well, I've been anticipating it since August 2015... )

ON THE RADIO THURSDAY 20th APRIL

Join me from 10am BST for 2 hours of Slow Media content, including an interview with the producers of Norwegian Slow TV, Thomas Hellum and Rune Møklebust
Also included in the broadcast is an hour of Slow Radio courtesy of The Wetland Project in Canada. Listen via RedShift Radio or the Tune In app.


Looking for an Interview?
Are you looking to interview someone about Slow TV? Here are contact details and an overview of interviews I've given for TV, Radio and Print.

Watch the documentary about Slow TV on Vimeo.

Lots more to come about #NRKRein on The Slow TV Blog over the next few weeks!